"BETWEEN TUBAS and EUPHONIUMS.....MISA MEAD"

Hello good day. Today's interview is very interesting because it is a recognized figure of the euphonium, curiously and happily associated with another great name of this instrument, but who has earned her own place in the world of euphonium on an international level.

I appreciate your sincere friendship and collaboration for this interview project which I hope you enjoy as much as I do. 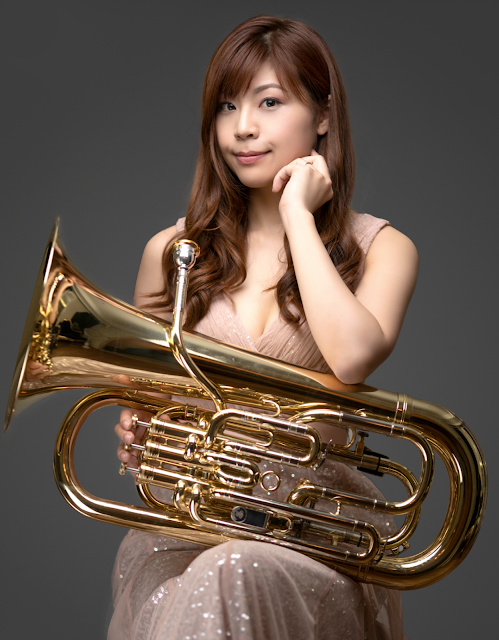 Without further ado, we begin

· What instrument do you use?

· What manufacturer and model are the instruments you use:

· What manufacturer and model are the mouthpiece / s you use:

Let’s talk about your EDUCATION:
· When and where did you start your Euphonium studies?

I started playing the euphonium when I was 9 years old in the school band in Japan.


· What reasons or circumstances led you to study this instrument?

My sister was playing alto horn.

I wanted to play same instrument but she said “ alto horn plays always off-beats and it’s boring, I recommend euphonium because it looks similar but has more melodies.”

I think alto horn is good instrument!  But I chose the euphonium as she recommended.

· Who were your main teachers?

Actually, I had many teachers.


Regarding your vast PROFESSIONAL EXPERIENCE:
Please give us an account of your experience as a soloist, member of chamber groups, orchestra, band, etc.

More than 20 countries and with more than 40 ensembles.

Treating OTHER TOPICS OF INTEREST.
Here in Spain, in some centers the Euphonium is considered to be an instrument that should have its own specialization and, on the other hand, some believe that, as an instrumentalist, one should know and master the Tuba and Euphonium.
• Could you give us your opinion on this and how you would approach this topic in the interest of education and training adapted to the necessary specialization that is currently required worldwide?

I think it depends on the countries. For example, people can specialise in euphonium in most universities of music in Japan.

As a country of wind bands, there are so many school bands in Japan and so many euphonium players too.

Also, as a county of brass bands, people can study specialist in euphonium in many music colleges in the UK too.

I think the countries where you can’t study specialise in euphonium where the dominates.
In these years, more countries started to put euphonium class in the university of music as same as more people play euphonium.

Tuba and Euphonium are really different and I think no many teachers has enough knowledge for both and play both as a professional level.

• How do you see the euphonium teaching today and with a view to the future?

I think it’s getting better. Because there are more euphonium players than before and more competitive. Also we can get so many information easily by internet now. I don’t know for the future but maybe better again.

Let’s talk about your EXPERIENCE IN TEACHING:
· Tell us in which learning centers you have taught classes (visiting teacher, courses, master classes, etc.)

I normally travel to other countries and do masterclasses or individual lessons.

I also do internet lessons.

· How do you organize your classes and the topic in general?

I search which levels students will come and make the plan.

It’s depends of the students.

· How long are your classes?

Normally, one hour for an individual lesson.

Masterclasses are normally 90 minutes to 2 hours.

· Do you think it is important for a student to make public presentations during their years of study? If so, how many times do you consider it appropriate and at what age or grade? Elementary, Professional, Superior?

I’ve never think about it before. Maybe once a year is good.

An important part of the course curriculum is standardized and based on the idea that the student masters the repertoire alone, sometimes to the detriment of the large group repertoire (Orchestra and Band), when in fact the majority of Tuba students and Bombardino are going to be teachers and / or members of a band and, to a lesser extent, of an orchestra in the case of the Tubas.
· In your opinion, how should this problem be addressed? How important do you think it is to include learning and mastery of the orchestral repertoire as part of the course curriculum?

I think the important point is a good balance. I think it’s good to study the standard repertories for every student for any music job for the future.

And also I hope students are interested in many other categories and study voluntarily.

· If I had to choose as a student (in a hypothetical situation), would you have a preference between a Tuba student and a Euphonium student?

I’m happy to teach both Tuba and Euphonium.
Mostly, my students are Euphonium but sometimes I teach Tuba too.

About your DAILY WORK.
· What type of repertoire do you mainly work in?

· What warm-up exercises do you use?

TALKING ABOUT TECHNICAL ISSUES:
· Could you give us your opinion on the different concepts of sound and what characteristics define it, the articulation, the types of instruments, the literature, if the influence of language and musical tradition on sound is considered important and how to play?

I think it’s connected our talking and playing. So when I visit different countries, I can find the characteristic of the language and playing.

I think when we play the piece, we have to search where it’s from, when it’s written, which style, etc… then we can get ideas about how to play.

· Tell us a bit about the manufacture of Euphoniums and mouthpieces and tell us about your experiences and tastes of a particular manufacturer and why?

I play Besson instrument. For me, Besson is the best sounds euphonium. And other things are good too, for example, valves, tuning which I use trigger, etc.

I use Soveregin 967T it’s lighter and easier to play than Prestige.

With Besson instrument, Denis Wick mouthpiece is the best combination for me. I use SM4XR, it make bigger sounds and easier to play for high notes. I used SM4X, it has warm sound, SM5 is keep my stamina longer.

You are a big woman player of the euphonium in Europe and Japan another places.
Please tell us about you experience and about our instruments en your born country and adopted country

I think normally women has less vital capacity and muscles so harder to play than men but euphonium is still ok for women’s capacity. I know some great female euphonium players are work so hard, have passions and wonderful musicality.

I can see there are no many female professional euphonium players in the world but why not, euphonium is open to everyone.

IN CONCLUSION:
· In your experience, do you think that the diversity of interpreters, instruments and the opportunity to train in various specialized schools is being homogenized in the interpretive centers that are already established? (Example: Russian, American, German-Austrian, English, etc.).

I don’t know. Because when I do my classes in different countries, normally euphonium players do the interpreter.

Misa, it is a big pleasure and an a great honor to count on your experience and
collaboration in this series of interviews.
Thank you very much and best wishes.
A big hug.
Publicado por Harold Hernández Lozano en 18:15 No hay comentarios: